Although I will often see toads among the garden critters, today was the first time I’ve ever seen a frog.  We’ve been having a bit of a heat wave this summer and with no frog habitat nearby, I was very surprised to see it.  I was milking the goats and the cat chased it into the barn.  Then chased it toward me.  I stuck out my foot to stop the cat and scooped up the frog.  I took it outside and set it down by our outdoor water hose that leaks while it runs (so there was a little pond).  It stayed there long enough to get it’s picture taken, but later after finishing my chores, it seemed to have moved on (or hidden better).

I’m always excited to see frogs, toads, snakes and other predators moving into the farm.  In this era of poisons as a solution for pest control, the real losers are those that used to hunt them, but that get so over-loaded with poison that they mutate and die out.  Meanwhile, the pests adapt to the poisons and only those that can survive breed and pretty soon the whole population of pests can withstand DDT.  But slower breeders like predators and humans accumulate greater concentrations of poisons in our bodies, so it takes us longer to bounce back.  The down side is that the pests come back twice as hard and now we’ve got a real problem because we’ve eliminated everything that used to eat them.  Population explosion of pests fueled by monocultures and not regulated with any natural systems.

My goal, as a farmer, is to create habitat for the predators and let them do the hard work of controlling my pests for me.  The frog was a surprise for me.  Since our farm is located at the top of two water sheds, we have very little standing water close by.  So this little frog must have made quite a journey.  I remember frogs were all over when I was a kid, but pollution seems to have taken its toll.  This frog seemed to be in good shape, no deformities that I could spot.

Other predator critters I’ve seen this summer include: preying mantis, snake, and toad.

Half a hog gives you a good supply of meat.  From half a 200 lb hog you get about:

plus 3 lbs of ribs

This Saturday, June 29th the puppies will be 8 weeks old!  On this day they will start going to their new homes.  But we do still have three male puppies left eager to find families.  If you are interested contact us right away, we will hold your place in line in the order we receive your $100 deposit.  At pick-up you can pay your balance of $150 ($250 total).  Puppies left are pictured below:

Known for her affectionate, friendly nature, Ripple is always a favorite.  Her coat has a bit of curl to it, and thus we call her Ripple.

Scout, turns out to be aptly named as he has already starting to follow us around for our farm chores.  He is extremely adventurous, and loves to be around people.  He is easy going and doesn’t mind being rolled over on his back.  He is a friendly little pup and will make an excellent farm dog.

When my father got cancer a few years ago, I dove into some extensive research to learn about alternative cures.  They revealed that the cause of cancer was basically a toxic overload of the body (although some people are more susceptible than others), so the cure was to detoxify the body.  My father did all these things and his cancer went away, without radiation, without chemo, without surgery.  In 6 months it was gone.  He was seeing a Naturopathic doctor that lived near him and supervised his diet and all “treatments”.

So when my father looked at this diet, he said, “But what can I have for breakfast?”  This recipe was my response to that:

Soak 1 cup wheat berries overnight in water.  Pour off the water (some people with cancer will drink it, they call it rejuvelac) and put the wheat berries into a colander.  Pour water over the wheat berries 2x a day until they sprout (will take about 3 days).  This will make more than one cup of sprouted berries.  Take 1 cup of the sprouted berries and combine with the kefir, flax seed meal and beet root powder.  Blend in your blender and pour into a bowl.  It will be a pretty pink and will be naturally sweet. 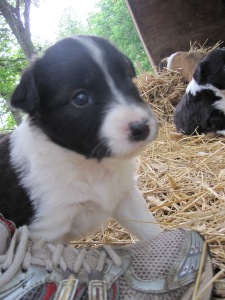 Cassandra is an easy favorite.  She is okay with being rocked over on her back and will drift off to sleep while you hold her.  She is so incredibly sweet.  Easy going, friendly, and comes right up to people.  She is fun with the kids (doesn’t bite too hard) and sweet as can be.  If you’re near our area, give us a call and stop by for a visit.  Our pups love company!  Cassandra and many of her brothers and sisters are still available.  A $100 deposit holds your place in line.  They will cost a total of $250 with basic papers.

This little guy was named after the mouse the book, and like that character, little Despereaux is full of spunk and vigor.  He is friendly and one of the first to greet us when we walk up.  He exhibits both brown, black and white markings and will be beautiful when he is grown.  He has a hearty appetite and is ready for action!   Despereaux is currently available for purchase.  All our puppies are $250 total, with a $100 deposit to hold your place in line.  This includes basic papers.

This puppy is the adventurous sort.  With black and white coloring and a friendly disposition.  Ranger is sure to be ready for all the adventures.

At two and a half weeks these guys are just starting to open their eyes.  Puzzle is a little brown and white English Shepherd.  Curious and alert he is a friendly little guy sure to be your best friend.